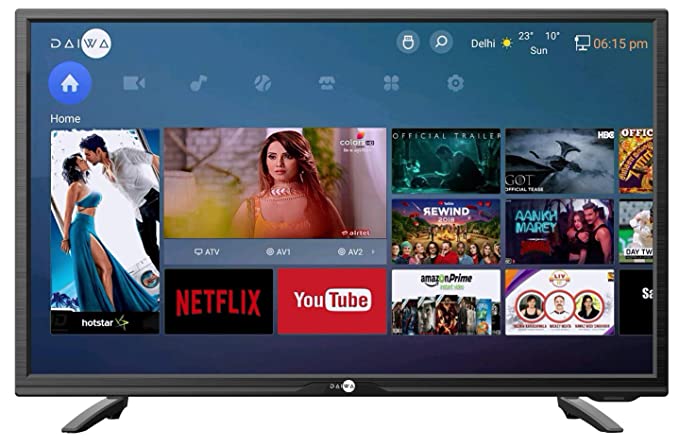 Daiwa launches 4 Models Smart TVs of Made in India

Four new smart TVs have been unveiled by Daiwa, ranging in size from 32 inches to 39 inches, for the new year of 2022. The Daiwa D32SM9 and Daiwa D40HDR9L televisions have been released by Daiwa.

Daiwa D32SM9A and Daiwa D40HDR9LA are the other two models of these TVs. These TV voice assistants have been given the go-ahead to operate. In addition, the TV is compatible with Cloud TV OS, which includes apps like Amazon Prime Video, Disney Hotstar, Zee5, and SonyLiv, among others.

Android 9 Pie will be the operating system for all four of these Daiwa televisions. An HD Ready 32-inch screen is on display in Daiwa’s D32SM9, as well as the D32SM9A. TVs are capable of utilising Quantum Luminite Technology. Both the D40HDR9L and D40HDR9LA models have a 39-inch screen with a resolution of 1366×768 on the other end of the scale. All televisions have 1GB of RAM and a quad-core processor. –

A surround soundbox is also included with the Daiwa D40HDR9L and D40HDR9LA, which have stereo speakers of 20W each. Wi-Fi, Ethernet, and optical output are also included on all of the TVs. The TV will not have built-in Bluetooth.

Apps such as Amazon Prime, Netflix, YouTube, and Disney Hotstar will work with Daiwa D32SM9, D32SM9A, D40HDR9L, and D40HDR9LA TVs. 25,000 free movies will be available through the Movie Box TV app. Voice commands are supported by the Daiwa D32SM9A and D40HDR9LA remotes.